Enquiries can be sent via email to renewablearthur@gmail.com.

Arthur Williams has taken over responsibility for this website. He is now responsible for Electrical MSc courses at the University of Nottingham, including an MSc in Electrical Technology for Sustainable and Renewable Energy Systems. He continues his interest in renewable energy, and particularly pico hydropower. He also maintains a website dedicated to information on the use of standard pumps as turbines. He was previously part of the research team at Nottingham Trent University and was the last one of the team to move on (in summer 2007). A short history of the Nottingham researchers and research and development activities is given in the next section.

The Micro Hydro Centre at Nottingham Trent University grew out of the research work of Nigel Smith, which began in 1985. His PhD work in collaboration with ITDG (now Practical Action) solved the problem of how to control a stand-alone induction generator with a robust electronic controller. Akkal Man Nakarmi, an engineer in Kathmandu, had already discovered that standard induction motors connected to excitation capacitors were a reliable and cost-effective option for micro-hydropower in Nepal, but he was lacking the technology to control the generator effectively. Nigel Smith was joined in 1987 by Arthur Williams, who investigated the use of standard pump units as turbine-generators, completing his PhD in 1992. They went on to design and implement successful demonstration projects using induction generator technology in the UK and later in Nepal and Pakistan, funded by the UK "Overseas Development Administration" through ITDG.

Georgios Demetriades, from Cyprus, began work on development of a low-head turbine design, completing his PhD in 1997. He was followed by Drona Upadhyay from Nepal, who researched the flow through the turbine using Computational Fluid Dynamics (CFD) and proposed improvements to the design.

From 1997, the UK Department for International Development (DfID) and research and development of standardised pico hydro systems (up to 5kW), suitable for batch manufacture in developing countries and installation with a minimum of skilled engineering inputs. The project developed the "Pico Power Pack" suitable for relatively high head schemes, using a Pelton turbine. Phil Maher joined the team working on this project. An international network was developed, with members in more than 40 countries, to disseminate information and to enable an interchange of ideas and experiences. Between 1997 and 2001, a regular "Pico Hydro" Newsletter was published.

This project was followed by further research on pumps as turbines by Arnaldo Rodrigues (again using CFD) who worked closely with a researcher based at the Technical University in Karlsruhe, Punit Singh. In 2004, research and development of low head turbines continued with the awarding of a grant from the Leverhulme Trust. Dr Robert Simpson was the main researcher on this project, working in collaboration with Practical Action in Peru. 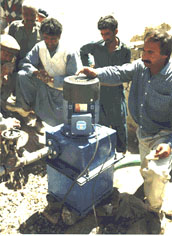